Bicyclists are among the most vulnerable people on California roadways. There are more than 54,000 bicycle accidents in California every year that require a visit to an emergency room, according to the California Department of Public Health, and more than 160 fatalities. In fact, California currently leads the country in bicycle traffic accidents. While San Diego’s beautiful scenery and warm weather make it an ideal city for bicyclists, the truth is busy intersections and congested roadways often pose a hazard for bicyclists. If you or someone you love has been hurt in a bicycle accident in San Diego, a personal injury attorney can help you protect your rights and seek compensation for your injuries.

In 2014, California legislatures passed a law requiring drivers to stay 3 feet away from bicyclists while passing. While 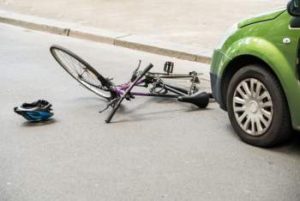 many bicycle accidents are caused by drivers who are not paying attention, reports submitted to the California Statewide Integrated Traffic Records System found that cyclists are at fault in bicycle-vehicle traffic accidents about 56% of the time. Bicyclists may cause an accident by violating the right of way, such as cutting in front of a vehicle or riding right through a stop sign or red light. About 24% of bicyclists killed in 2012 had a blood alcohol content that exceeded the legal limit. About one-third of bicycle accidents involve a biker being hit by a car, which is also the most common cause of bicyclist injuries. Most bicycle accidents occur in urban areas, usually during rush hour. A recent study found that people in disadvantaged communities in San Diego were ten times more likely to be hit by a car with 30% off pedestrian and bicycle accidents occurring on just eight roads in the city, the most dangerous of which is University Avenue. Bicyclists are at a higher risk of serious injury and death than car occupants. Common bicycle accident injuries include traumatic brain injuries, lacerations, fractures, spinal injuries, amputation, and serious disfigurement.

If you or someone you love has been hurt in a bicycle accident due to someone else’s recklessness or carelessness, a bike accident lawyer in San Diego can help you protect your rights and seek compensation for your medical bills, lost wages, and pain and suffering. Contact Rawa Law Group today for a free consultation with a San Diego bicycle accident injury attorney to discuss your case.

Other Cities That We Service: Chula Vista, El Cajon