Orange County is California’s 6th most populous county, but the second most densely populated with about 3,200 people for every square mile. The four largest cities in Orange County — Huntington Beach, Anaheim, Irvine, and Santa Ana, each have a population of more than 200,000. Many of the cities of Orange County, most notably Huntington Beach and Laguna Beach, dot the county’s Pacific coastline. 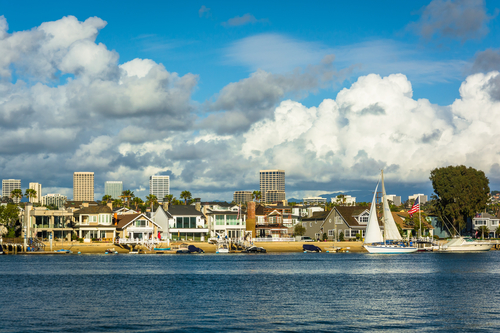 The first permanent European settlement in the region was Mission San Juan Capistrano, which was founded in 1776. The area’s economy was focused on ranching until the 1860’s, when severe drought impacted cattle ranching. Avocados, citrus crops, and oil were also important to Orange County’s early economy. The population of the area truly began to grow when the silver discovery in 1887 attracted new settlers to the area. In 1889, Orange County was split from Los Angeles County. Its name is said to have come from the fruit to promote the area as a semi-tropical region to bring immigrants. In the 1940’s, Buena Park native Walter Knott brought new fame to Orange County when his boysenberries became a hit. After selling the berries at a road stand for years, Knott opened Knott’s Berry Farm just eight miles from Disneyland in 1940. Today, Knott’s Berry Farm is the 13th most visited theme park in the country with more than 3.7 million visitors each year. Disneyland, located nearby in Anaheim, boasts more than 18 million visitors every year. Tourism is an important part of the economy in Orange County. Cities throughout the county receive millions of visitors each year due to their proximity to beaches, golf courses, hiking trails, and shopping. Our Attorney Services in Orange County